Il Duce in the round

We had some fascinating conversations with people while we were travelling. Meeting up with some of our artist friends and colleagues invariably led to interesting discussions and new ideas. Here's a preamble by way of introduction to one of them. (And believe me, it's a corker.) 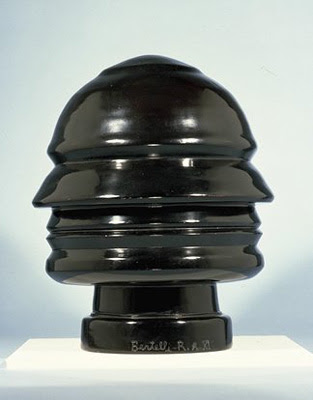 One of the more unusual items in the Imperial War Museum's (IWM) art collection is this head of Mussolini. Supposedly showing the omnipotence of il Duce, it is a fascinating piece, hearkening back to the Roman god Janus (most appropriate for a two-faced charlatan like Mussolini) but intended to show the gaze of the god-machine Mussolini looking in all directions. But it also has a disconcerting effect of not quite being able to get a decent view of the face - just the profile. Almost the exact opposite of 'the eyes follow you around the room' trick used in painting.

'Profilo Continuo' was made in 1933, or Year Eleven of the new era, dating from Mussolini's march on Rome in 1922. At least two other terracotta copies of the head exist but it is not known how many were made. The Museum also owns two smaller versions.
...
Bertelli had also become interested in Futurist ideas and the theories of F T Marinetti during the 1920s and the head embodies their passion for machines, speed and power. The image is very much in keeping with Mussolini's own self-publicity of the time which falsely presented him in the role of technological and cultural pioneer.

(Actually Mussolini was a technological pioneer, and of course we cannot look at Fascist art without awareness of its context overwhelming any possible merit, but we'll return to that another time.)

I wasn't aware of other versions until researching this, but I was interested to see this version in the American Wolfsonian collection. 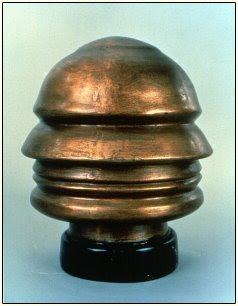 It looks a lot more pugnaciously bull-headed than the black version, I think. On the other hand, the relentless modernity of the IWM's black version is undercut by Bertelli's signature in a very humanist cursive script. Go on, have another look. What do you think? 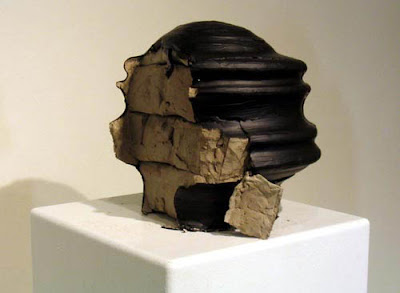 And I also tripped over this one. It takes the concept of Il Duce to the destruction of fascism: as the sculptor, Julian Voss Andreae, says on his website "After completion the sculpure [sic] slowly fell apart while on display in the gallery. The image shown was not staged - the broken off piece lies on the floor the way it fell." 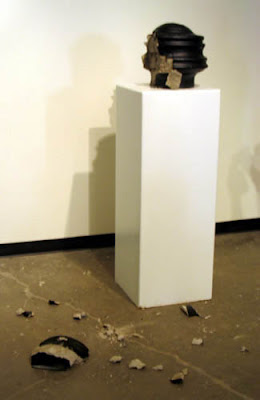 Yes, yes, very good, but technically poor, I think. Like too much contemporary art, it's a pity that it fails on the getting the basics right - here the 'portrait' aspect, unless someone's got a very funny shaped head.

Another update is here, more ostensibly political, and featuring George W Bush. Christopher Fahey explains the story on his website: 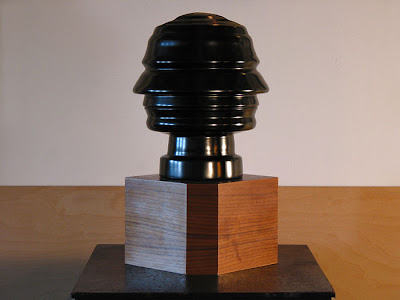 "The above work is an astounding wedding gift from my close friend the artist Julian Laverdiere." He adds: "It is a parody of the fascist/futurist artist Renato Bertelli’s Head of Mussolini, this time re-imagined with our very own Decider in the place of Il Duce.

Where the original was intended to glorify Mussolini as the all-seeing central hub of Italian power, Julian’s refiguring seems a more accurate use of the spinning metaphor, with the leader’s head spinning helplessly as events all around him slip out of control faster than he can think."

Hmmm. On the other hand, it's one time Bush has looked sharper (around the edges) than a fascist dictator.

It seems that this round-head idea is a bit of a one trick-pony, and while original, can't seem to move on. Certainly the limited number of successful imitators who've become moderately known on the web indicate this. But then, there's always something surprising. So what's this got to do with anything? Well check back in a few days, and all will be revealed.

Oh, and PS: Incidentally, Mussolini DIDN'T make the trains run on time. It's a myth. See Snopes. Publicity's a funny thing; handle it right, and long after you and your mistress have been hung upside down on meathooks, some of your reputation will still get an undeserved boost. Also, did you notice the different dates given for Bertelli's birth by the IWM and Wolfsonian? Any offers on the correct one?

Hi, I just stumbled upon my old "Self-portrait as Il Duce" on your page here. Interesting how you misread the profile in my piece: This is actually quite an accurate rendition of my own profile, but looking up and with an open mouth, like someone drowning. (I don't have a funny shaped head, honestly.) Look at it again again an you will see it.

Best regards and keep up the good work,
Julian (Voss-Andreae)

Dear Julian,
Thanks for coming by and correcting the misunderstanding - you're right, I do see it now. That's the challenge of this profile, people either 'get' the profile immediately, or it gets missed.

More appropriately I commend Julian's website to our readers, and say in return keep up your good work too!

Taccola
Goldfields, Victoria, Australia
Put together by Bev, an expatriate Canadian art-historian quilter and editor, and James, a returned native and aviation writer, this is a channel for our far flung friends and family. Oh, and Toby the dog, of course.